When I am teaching my students about making predictions and inferences while reading, I remind them that they have to ‘update’ their thoughts as they gain new information. One of my favorite picture books to use in teaching this concept is Suddenly by Colin McNaughton  . This book is the opposite of predictable. When the

reader tries to guess what’s going to happen next (the pig will walk out of the school house into the wolf’s clutches), something far less predictable happens (the pig returns to his school desk for money and leaves out the back door instead.) On every page, the reader is flummoxed when the plot takes a completely unexpected twist (the wolf crashed into a wall instead  of nabbing the pig at the supermarket!).

I love thinking about this in the realm of God’s work in our lives. And the Bible has so many examples of plot twists! We think we’re the only ones who get our hearts set on something and then feel disappointed when it doesn’t work out…but then get happy again when something better occurs. Well, that emotional roller coaster has been ridden for centuries!

Genesis 15-18, Matthew 1-God shows Abram the countless stars in the night sky and promises that Abram’s descendants will outnumber them. {Wow! Amazing! Thrilling!}  PLOT TWIST: Abram is nearly 100, and Sarai his wife isn’t too far behind. {Wait, what? That’s crazy! And darn near impossible!} PLOT TWIST: God did it anyway…and Jesus was born from that infinite number of Abram’s descendants.

Daniel 1-3–Daniel, Hananiah, Mishael, and Azariah were  wholesome, Godly young men who prayed daily and didn’t defile themselves in Babylon, the land of his captivity. They were promoted in Nebuchadnezzar’s kingdom. {Yay! Young Jewish men take a stand and are making positive influences! Hooray!} PLOT TWIST: King Neb threatened them with death via fiery furnace if they didn’t bow and worship the idol he made. And then he did it! He put them in a flaming furnace!!! {Whaaaaaa? That’s seriously messed up! } PLOT TWIST: God sent an angel to keep them company in the furnace…aaaaaaand when they came out, ‘the fire had not had any power over the bodies of those men; the hair of their heads was not singed, their tunics[f] were not harmed, and not even the smell of fire came from them.’ (NRSV)  {Boom! Not even the smell of smoke on their clothes…and Neb had tried to extinguish their faith. } Not only that, the king made a decree guaranteeing the security of these guys.

Daniel 6-– As Daniel’s life continued, he remained honorable and trustworthy, so he continued in the service of the upcoming rulers of Babylon. In fact, he was about to be promoted into a place of great power. {So great! A Godly young man rising in the government…the world needs more of that! What an example!} PLOT TWIST: Daniel’s colleagues weren’t so fond of him, and they manipulated the king into decreeing Daniel’s daily prayers illegal. The punishment for praying to anyone except the king was being thrown to the lions. And the ignorant king went along with it.  {Whaaaaaaaaaa??? Seriously? Daniel’s the good guy…how can the king agree to such nonsense?} PLOT TWIST:  God closed the mouths of the lions…until the king’s advisors came along the next morning. The king realized the error of his ways and reinstated Daniel…and his scheming sidekicks were lion breakfast.

Acts 9–Saul was a dreaded Christian-killer. Daily, he sought worshipers of Christ to imprison and stone to death. {That’s terrible! What a ruthless, horrible man!} PLOT TWIST:  On his way to capture worshipers in Damascus, God spoke to him from heaven, questioned his motives, and blinded him for three days. {Yeah! There ya go! Get him, God!} PLOT TWIST: When Saul regained his sight, he gained a new identity…Paul, the apostle of Jesus Christ, that was largely responsible for the spread of the Gospel to Europe and Asia.  {Well, I did NOT see that coming! What a miracle! You sure did ‘get him’, God!}

And there are so many more! Reading through Joseph’s life is a tale of twisted truths and flat out lies until it’s relieving resolution.  The death of Lazarus was heartbreaking to his sisters, until they saw that Jesus could untwist Lazarus’s burial clothes and restore him to his life’s story. Zaccheus was a stinker of a little man, until Jesus untwisted those purse strings and heart strings and changed the plot of that tax collector’s story.  In the glowing stories of Ruth  and Esther , these brave women were writing their own versions of ‘herstory’, following the paths that they believed that God had planned for them, when their plots were severely twisted. Death, immigration, and conspiracy wound around the secure cords of their lives and snapped the comfort right off. But then, God restored the story. He gave them back their lives…in abundance.

How often we get caught up in the plot twists that are happening to us right now. We miss the bigger story that God has written for our lives. In each of the Bible stories above, the people were ‘minding their own business’, doing what was daily expected of them, when disaster struck. I’m sure that they questioned what was happening…especially Saul and Zaccheus who had yet to develop a connection to their Heavenly Father. But those other saints, they must have had their questions. ‘But Father, I was doing what I thought was right?’ ‘Abba, wasn’t I doing what you told me to do?’ ‘Forgive me, Father, if I misread your directions. I thought I understood.’

Just like us. We question ourselves. We question God. We question others. But what we need to realize is that it’s just a plot twist. It’s not curtain drop. We’re not at the end of our story until we die. The Author and Finisher of our faith is thoughtfully considering each event that occurs to us…and how it will ultimately accomplish our perfection and His glory. Others will ‘read’ our story and note our unfailing faith…or our faith struggles and restorations. God wants our tales to reach audiences beyond ourselves. That’s why our story goes on…after the plot is twisted.

19 The thought of my affliction and my homelessness
is wormwood and gall!
20 My soul continually thinks of it
and is bowed down within me.
21 But this I call to mind,
and therefore I have hope:

22 The steadfast love of the Lord never ceases,
his mercies never come to an end;
23 they are new every morning;
great is your faithfulness.
24 “The Lord is my portion,” says my soul,
“therefore I will hope in him.”

25 The Lord is good to those who wait for him,
to the soul that seeks him.
26 It is good that one should wait quietly
for the salvation of the Lord. 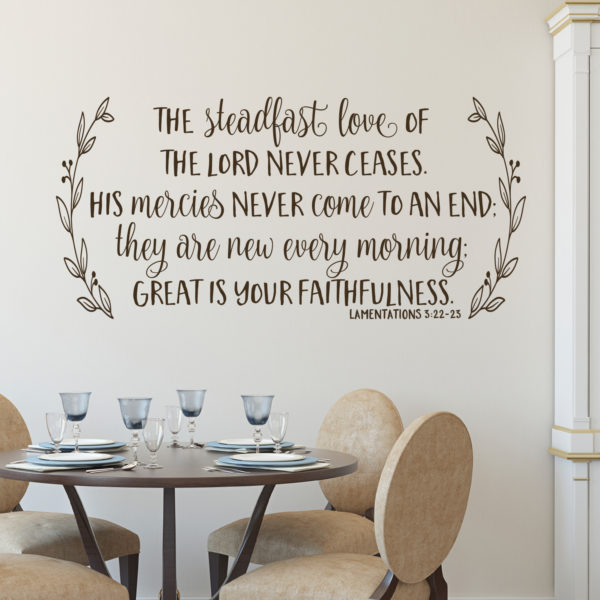